Welcome to the September issue of the CGC newsletter. We have celebrated a few birthdays this month as well as welcoming two new starters, Carly Fripp & Jade Lawrence, into the business working with the Civil team focusing on Rail and business support appointments respectively. And Carly gets to sit across from George, what a treat!!

We have an industry overview from Dan Kundi to follow and also some detail regarding what we’ve been up to at CGC this month from Evan Morgans.

The end of Q1 is upon us and we’ll be evaluating the business performance as well as enjoying the EOQ event on Friday. Get your flat caps out the wardrobe, we're going clay pigeon shooting!!

New South Wales is spending a record amount of money on infrastructure and it is joining other states in Australia in calling on the federal government to join them in their efforts to keep the economy resilient.

At 28 years, the country has had a longer growth cycle than any other in the world. But its ability to prolong it is coming into doubt as signs of the economy slowing down are appearing.

New South Wales, the state with the biggest population and economy in the country, is investing a record AUD$93 billion in infrastructure during the next four years. The highways and light rail lines that are being built will not only create jobs but also make existing ones more productive.

Of the record AUD$93 billion that the New South Wales government plans to spend on infrastructure during the next four years, nearly 60% is going to transport: $32.2 billion for public transport projects and $23.4 billion for roads.

Among the various public transport projects it is overseeing, Sydney Metro is the biggest. The first of the three light rail lines that will comprise it, Sydney Metro Northwest, opened in May. Its bridge and viaduct were built by Salini Impregilo. Construction on Sydney Metro City & Southwest, is underway, with tunnel construction to be completed by 2020. This second line is to open in 2024. Work on the third and last line, Sydney Metro West, is to begin in 2020 at a cost of AUD$6.4 billion. It will connect central business district of Sydney with the nearby precincts of Parramatta. Other projects include the Parramatta Light Rail, the North South Metro Rail link and the Western Sydney airport.

As for road projects, there is the AUD$4.1 billion WestConnex motorway along with the M4-M5 link and Rozelle Interchange in Sydney, Gateway ($1.8B), Prospect Drive and Memorial Avenue and the M12.

The infrastructure boom is here and is here to stay for the foreseeable future so for more information regarding contract opportunities in the NSW market please call Dan for a confidential chat on 0407 091 397 or email daniel.kundi@cgcrecruitment.com

Its been a busy quarter this time with social activities taking a back seat to hard work before silly season commences.

CGC Brisbane were part of a charity gold day raising money for MND through a top client of ours and their charitable foundation #Condevcares.

The Brisbane office thought they had a shot at victory with three holes to go at 3 under par, only to snatch defeat from the jaws of victory dropping shots on the way home to finish level on the day, with the winners coming home with a staggering 21 under par round.

Here in the picture we see Dave Hope with his signature octopus falling out a tree, turbo Jim Furyk golf swing teeing off on the front 9. 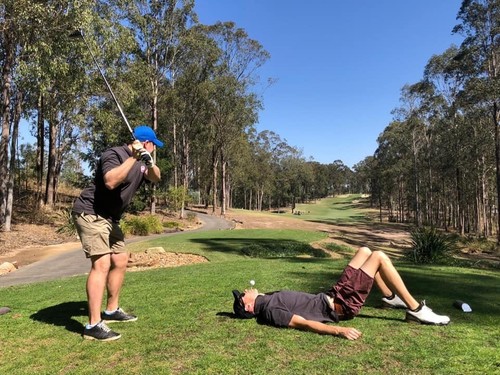 Also welcome on board Carly Fripp and Jade Lawrence!